Settling In (next step) 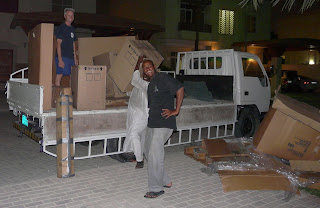 Late last night our shipment from Canada arrived at our door.  Tim spent five hours at the airport, working his way through a series of steps, levels of bureaucracy, and utter chaos, to retrieve our boxes which were packed and sent on August 5. 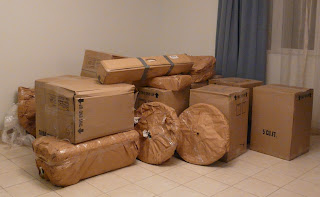 We are still not sure of the full story, but our shipment left Bridgewater on August 5 and was scheduled to go to Montreal to get on a container ship.  After six weeks at sea it should have arrived in Doha, cleared customs, and been delivered to us by mid-October.  Early in October we contacted the company in Nova Scotia looking for a shipment tracking number so that we could complete the paperwotrk on this end.  After many emails and phone calls we discovered the reason that a shipment tracking number could not be found was because the shipment was never shipped!  On October 13 our shipment was located in Nova Scotia, just 100km from its origin two months prior.  Then things started moving quickly.  Within 24 hours the shipment was on a plane and on its way to London, Dubai, and Doha. 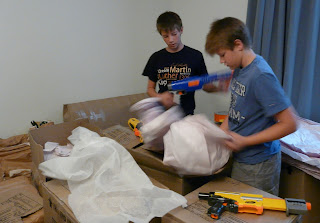 Many people have told us that the arrival of a shipment is like Christmas.  We were very skeptical of this considering that we had packed all the items -- no surprises!  But the shipment arrived after Max and Simon were asleep, so in the morning they were excited to see all the boxes and begin to unpack their favourite possessions.  While it may not be Christmas, there is certainly a sense of comfort in being surrounded by your own familiar things.
Posted by Chutes at 2:51 AM