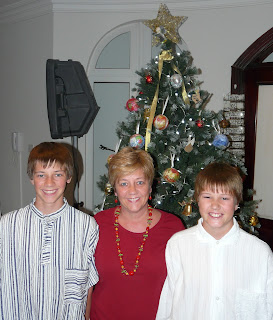 Our first Christmas Day in Qatar had a few surprises and a few new traditions.  It was a beautiful warm day here.  We have missed the usual cues of Christmas: no snow, no lights on homes, no Santas in the mall, no Christmas carols on the radio, no commercialized Christmas advertisements.  But in the absence of those things we have enjoyed a restful time. 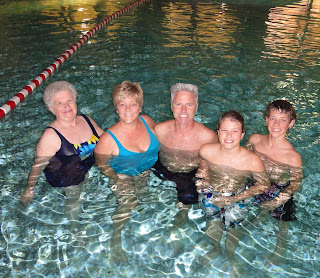 We continued a tradition that we started in Kenya of having a late night swim on Christmas Eve.  Tim's mom, Nilda, is with us for this holiday and was sure that this was the first Christmas Eve swim that she has ever had! 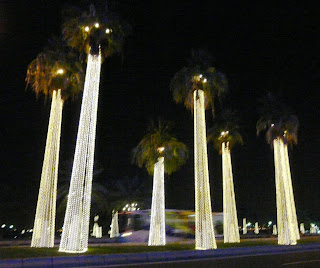 This year we had a new twist on our old tradition of driving on Christmas Eve to look for Christmas lights.  There are no Christmas lights but we drove along the Corniche and marveled at the miles of palm trees lit by thousands of lights on their trunks. 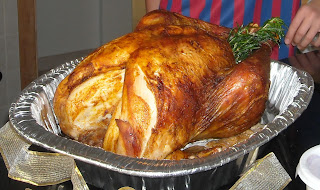 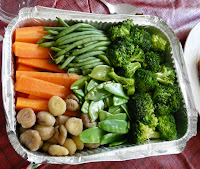 A new tradition this year was that we had Take-Away Turkey on Christmas Day.  The local hotels will prepare a full turkey dinner for your family to eat at home.  We had a 10 kg turkey, vegetables (including roasted chestnuts), roast potatoes, chestnut stuffing, gravy, and cranberry sauce.  All without lifting a finger! 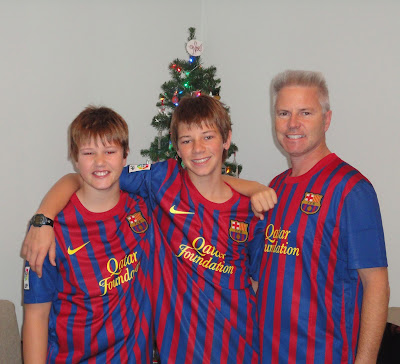 Our surprises this year were the gifts we received from each other.  Max and Simon gave Lisa a beautiful gold Arabic letter L.  We finally gave Max and Simon a Wii and 42 inch TV (they have been asking for one for four years).  But Tim was most surprised when he received an official Barcelona Football Club jersey.  He had spent weeks looking for one for Max and Simon.  The jerseys are popular and hard to find.  Last December 2010 it was announced that the Qatar Foundation logo would appear on the soccer jersey of the Football Club Barcelona.  The new jersey was unveiled in May 2011 and the team is wearing the new shirt this season.  Some Barcelona fans are not happy with the deal because it is the first time in 111 years that the club has had paid sponsorship. Some Qatar people are not happy either because the Foundation is a charity and has just spent $250 million supporting non-charity athletes.   The Barcelona Team just won the Fifa Club World Cup so the new logo is being displayed by world champions. Tim works for the Qatar Foundation.